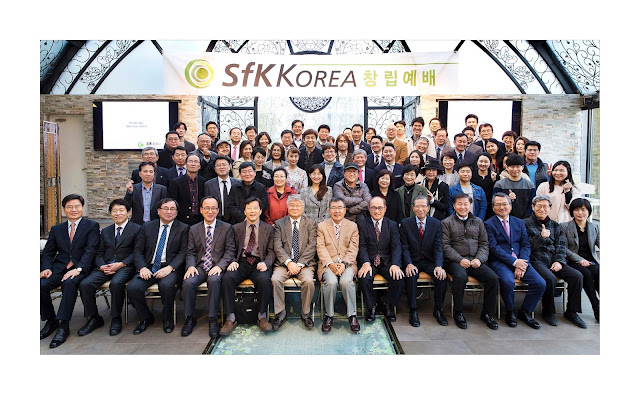 SfK Ministries held a special service in Seoul, Korea on March 16, 2017 to praise God who allowed SfK Korea to be established. Also, we held a session to introduce to the first BAM Fund of SfK Korea, called SfK BAM Fund I.

Almost all people who are involved in BAM, directly or indirectly, joined us in celebrating God for His grace upon SfK Ministries. The program was held in three parts. 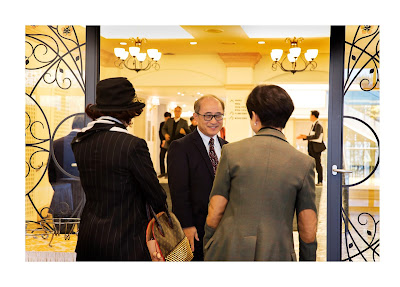 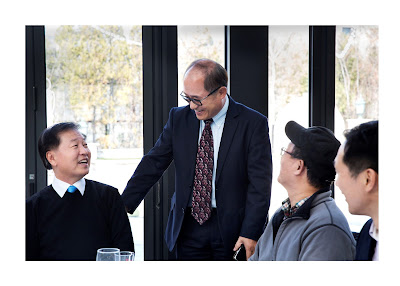 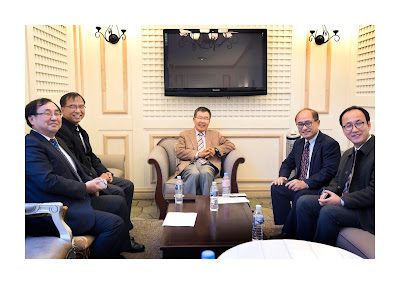 The first part was the service. Hayan Lee and three young adults led the praise. Sam Cho led us in prayer and Rev. Dongho Kim delivered the message based on Isaiah 11:6-9. Gwang Sik Park performed a couple of hymns with his saxophone and Rev. Jong Pyo Im gave us the benediction. 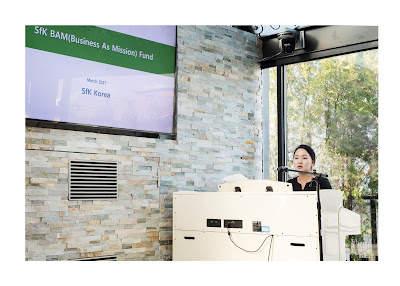 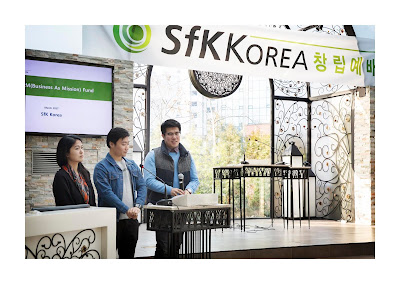 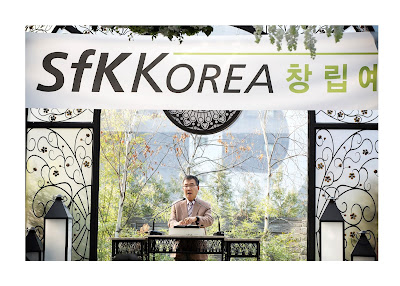 The second part was the presentation. A TV talent Won Hee Kim stood as an MC. She has been involved in an aid program to help the children in Haiti. Rev. Dongho Kim gave a short welcoming remark as Chairman of the board of SfK Korea. Then three people gave their congratulatory remarks. Missionary Min-Young Jung gave a remark from the perspective of global missions trend. Rev. Dongho Song gave a speech from the standpoint of BAM in Korea. Elder Jae Jung Jang from Manila, Philippines gave a speech as a BAM practitioner. Then, Jeffrey as CEO presented an introduction to SfK Ministries overall and Wonmin Son as COO gave a presentation about the SfK BAM Fund I. 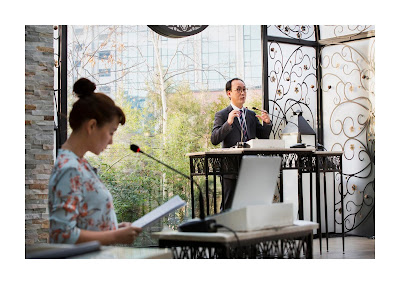 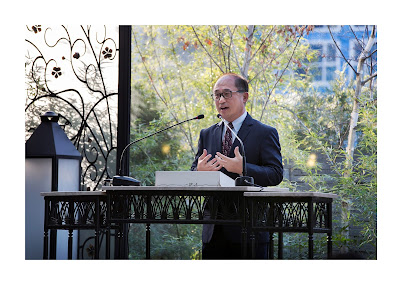 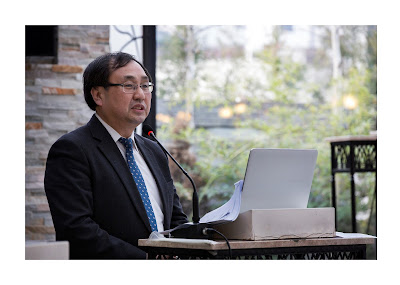 The third program was dinner and fellowship. Rev. Dongjin Kang prayed with thanksgiving to God for the food. People talked about various issues in round tables. We had wonderful fellowship with people at and around the tables. I had a brief discussion with Rev. Dongjin Kang to hold an in-depth discussion in July after July 28 to brainstorm about his organic farm project and how to expand the program into other parts of the world. 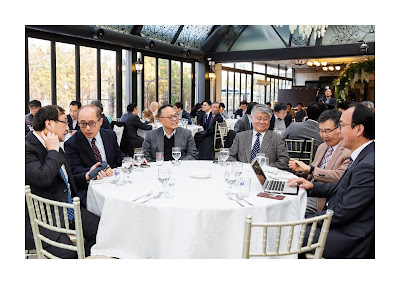 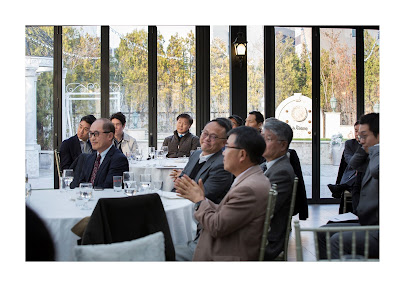 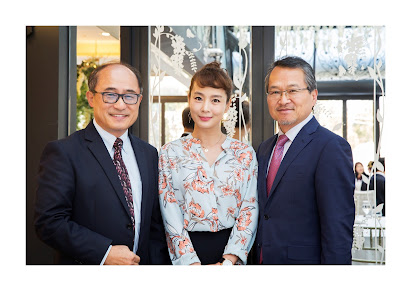 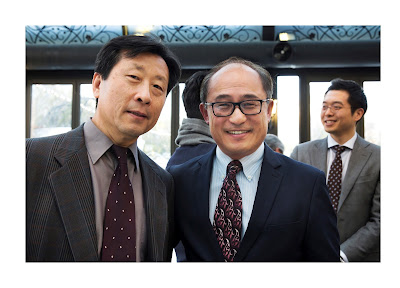 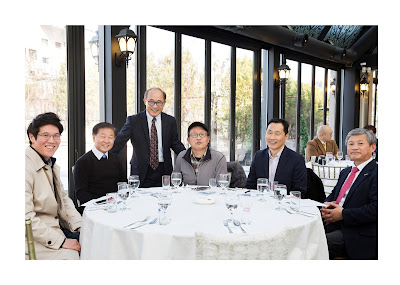 Overall, approximately 90 people participated in the program. Many SBS members helped as a photographer and helpers. Wonmin Son mobilized a video-grapher to take video shots of the event.

We all were grateful to the Lord for the good turnout and for the blessed beginning. We will see what the Lord has in store for His Kingdom to advance through SfK Ministries. - Jeffrey
Posted by jlee80111 at 8:21 AM No comments: 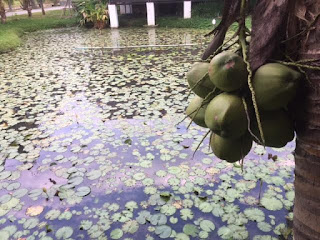 Chiang Mai, Thailand. It was a follow up consultation to the consultation on the prosperity gospel held previously. It was sponsored by the Lausanne Movement and BAM Global Think Tank since it is closely related to BAM.

During the consultation of several days, all participants gathered, deliberated and made contributions on the presentations and the papers. On-line real time contributions were all productive and effective. Some groups were better prepared than others, but all came out feeling better than before. We all prayed for each group as the Holy Spirit burdened our hearts. I prayed for the Wealth Creation and Justice group. 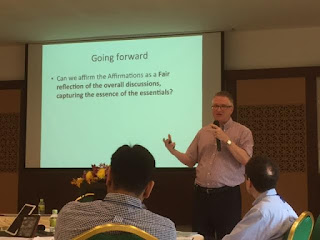 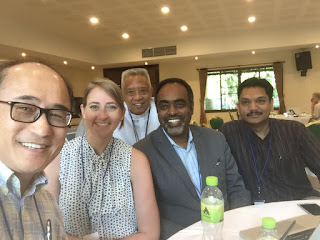 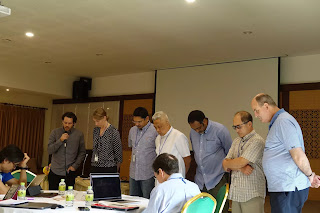 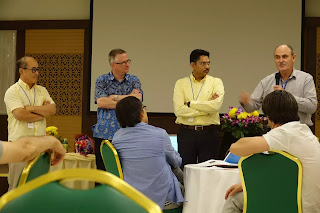 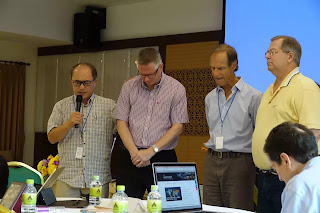 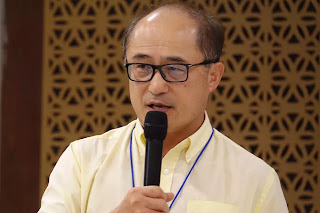 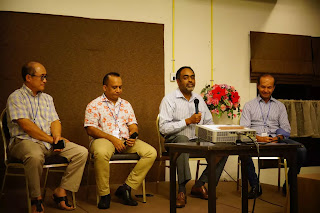 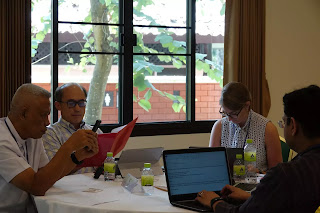 I had to skip almost a day due to the time of waiting for a Thai government official who never showed up, in conjunction with my work permit in Thailand as a volunteer. But otherwise, I have been actively participating in the consultation.

In addition to the pre-consultation and during the consultation, there also is a post-consultation. Within 30, 45 and 60 day time frame, almost all participants will write additional cases and make contributions to the papers.

During the consultation, I met up with several people who were wonderful people of God whom I came to respect. There were approximately 30 people who participated in the consultation coming from 16 different nations. Wow! Among them were three Koreans/Korean Americans: Paul Mindong Lee, a Wheaton College professor and Pastor Dongho Song, IBA Executive Secretary. Our fellowship was joyous. 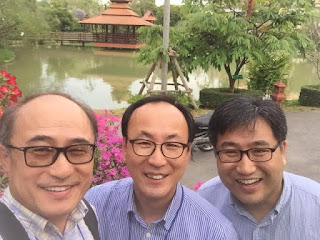 The consultation took place at Horizon Village and Resort that was standing on a beautiful complex of 150 acres filled with artistic plants, flowers and animals. On one evening, we had an excursion to the Night Bazaar in the old town on a Songthaew, a covered pick-up truck that is used for public transportation in Chiang Mai. 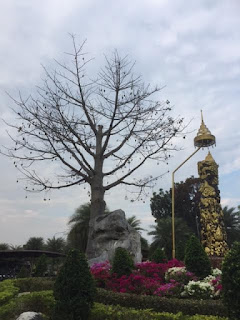 It was a blessing to be part of this consultation. - Jeffrey
Posted by jlee80111 at 8:10 AM No comments:

A Reflection on Business as Mission... 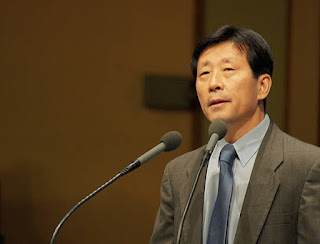 Min-Young Jung was a missionary to Indonesia, translating the bible for one of the Indonesian minority tribes. He also served as Deputy CEO for Korea's Global Bible Translators (GBT). For several years, he served as Vice President of Wycliff International until the end of 2016. Currently, he is Ambassador to the Global Mission Movements with Wycliffe Global Alliance.  Min-Young is Adviser to SfK Ministries on Global Missions Strategy.

A layman's perspective
I am not in a position to say anything substantial about business. Yet when it comes to the theme of missional business or business as mission (hereafter BAM), especially since it is increasingly acknowledged as a crucial approach to the Great Commission, I feel I can and should add my two cents' worth to it as a fellow Kingdom worker. As we all have been awakened rather belatedly, business should not be demoted to 'the lesser half' of our age-long dualistic understanding of missions. It sure can provide resources and opportunities for missions, but instead of taking it as a disposable tool for the 'real ministry,' we should do our homework of integrating it within the spectrum of holistic mission.

Integrity—a Christian core value
To discuss BAM properly, we should first understand the concept of holism or integrity, a prominent core value of the Christianity. Integrity is intrinsic in the incarnation in which the eternal Word was not just pronounced to be heard but embodied ('en-fleshed') to be seen as well (John 1:14, 17-18). Even though the apostle John borrowed the term 'logos' from his contemporary Greek philosophy, he effectively filtered out the Platonic dualism by introducing the incarnated Word of God.

Since God is the Word, His Word represents His very being. Thus He cannot speak a lie or change His promises: "God is not a man, that he should lie, nor a son of man, that he should change his mind. Does he speak and then not act? Does he promise and not fulfill?"(Num 23:19) Likewise, we who are created after God's image─which was lost in sin but restored through the redemptive sacrifice of Christ─should maintain integrity in our word and behavior. Our word cannot be simply a sonic wave, but it should represent who and what we are, as we often stake our trustworthiness by saying, 'I give my word.'

Primary and secondary callings
As Os Guinness rightly points out in his great book The Call: Finding and Fulfilling the Purpose of Your Life, our primary calling is not to a specific job but to (and for) the One who calls us. In that sense, every Christian regardless of his/her specific vocation has the same primary calling. Business, then, is a secondary calling which is an integral component to embody our primary calling. Whatever we do, whether it be a church-related work or a market-place business, we as followers of Christ should do it not only for the Kingdom cause but also in ways Christ Himself role-modeled: "As the Father has sent me, I am sending you."(John 20:21)

It sure is commendable to use business profit for the Kingdom cause. But it is more important to run business as if Christ Himself were in charge. Success in business is not as essential as integrity, transparency, common good, etc. which reflect the character of Christ. BAM, as I understand it, is meant to demonstrate God's glory through the manner and ways (process) of running business, not simply through appropriation of the profit (result).

Qualification of a witness—integration of word and deed
So, a crucial question is who runs a business, along with how and why, rather than which business. And it takes integrity, not religiousness, of the person in charge to witness the gospel through business. The word 'witness' can be either a noun or a verb depending on the context. The Bible focuses more on the qualification of a witness (noun: 'being') than act of witnessing (verb: 'doing'): "You are my witnesses"(Isa 43:10); "You are witnesses of these things"(Luke 24:48); "You will be my witnesses"(Acts1:8). Doing will flow naturally from being, not vice versa. If you are an authentic witness, the gospel will be witnessed through the way you do business.

Witness may or may not include the act of evangelism, and witness is a more fundamental and broader concept than that of evangelism. Modern evangelicalism has made a serious mistake of equating witness with evangelism. Witnessing the gospel normally takes verbal proclamation, but the credibility of our message is either reinforced or invalidated by our character, attitude and behavior. That's why the Lausanne Covenant declares that it takes not only proclamation but also demonstration of the gospel.

Salt and light—a market place spirituality
The gospel should first be seen before heard, and business is a great vehicle to demonstrate the excellent values of the gospel, i.e. salt and light of the world (Mat 5:13-16). Paul says, "the fruit of the light consists in all goodness, righteousness and truth."(Eph 5:9) If we run business with justice and sincerity for common good, it will distinguish (meaning 'holy') our business from worldly ways of injustice, falsity and selfishness, thereby effectively demonstrate the gospel values.

Thus, witness is much more than verbal proclamation of the gospel. We witness both verbally and non-verbally. As is often said, "we cannot not communicate." We keep communicating to the people with/for whom we work. As Christians we keep emitting certain (intentional and unintentional) messages through our words, deeds, attitudes, manners, etc. By introducing a worship service and/or a Bible study to our work place, we tell the world that we are Christian. But by running our business in Biblical ways following Christ─constantly asking "What would Jesus do?"─we demonstrate the gospel values. So, as the famous Shakers' maxim encourages us, we should "walk the talk." And this is what BAM is all about.
Posted by jlee80111 at 4:14 AM No comments: